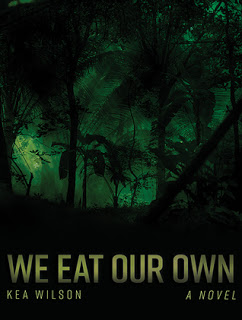 We Eat Our Own is a reimagining of the making of an infamous movie called Cannibal Holocaust. It was an exploitation movie, featuring all kind of violence, from rape to murder and cannibalism, but also one that strives for maximum realism. In her book, Kea Wilson is portraying a world of emotional dog-eat-dog, with the movie and even the reality around the film set becoming part of a cannibal act where people use and consume and corrupt others.

I can't say I enjoyed the book too much. It is very well written and it makes the reader get visceral feelings about the people and the events inside, however I couldn't make myself care about any of it. In striving for realism herself, Wilson managed to make all her characters human, flawed, real, and almost impossible to empathize with. You understand some of them, you even see yourself think or act the same, but none of it is something you would want to see yourself do. Also, while a lot of the people in the book are caught in an abuse cycle, none of them is actually stuck there. They can leave at any time. Perhaps this is the most intriguing and interesting point of the story: even the most horrible things that we do to each other require some form of consent from the victims, some form of submission, without which the abuse would never happen or at least, not last too long.

In conclusion, I am sure there are a lot of people that will enjoy the hell out of this book. People oriented, feeling focused people, perhaps. I had difficulty making myself finish it, even fully conscious that the writing was very good. But this is my review, so I will not grade this above average. Probably it is a good idea to watch Cannibal Holocaust first, even if the movie is only an inspiration for the book.