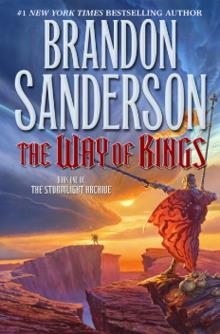 Brandon Sanderson proves again he is a brilliant writer. His Stormlight universe is not only vast and imaginative, but the characters are both compelling and well written.

Way of the Kings has some slow parts, though, and even if I kind of liked that, it is uneven in regards to its characters: some get more focus, some just a few chapters. That means that if you identify with the lead characters you will enjoy the book, but if you empathize with the lesser ones you will probably get frustrated.

I particularly enjoyed the climax. It was as it should be: the tension was rising and Sanderson just wouldn't let it go, it just kept pushing it and pushing it, filling in the motivations of the character, adding burden upon burden, making choices as difficult and as important as possible before finally allowing the release of his characters making one. Alas, the wonderful ending is followed by epilogues, several of them, which just seem boring afterwards, in comparison.

Great series, though, I recommend it highly.