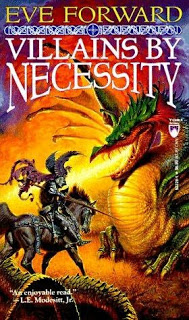 Villains by Necessity is not a masterpiece of literature, but it is a fun fantasy book that doesn't feel the need to be part of a trilogy or take itself too seriously. Perfect for when you want to pick up a book because you are tired, not because you want to work your brain to dust. First work of Eve Forward, it is rather inconsistent, moving from silly to dead serious and back and making the heroes of the story oscillate between pointlessly evil and uncharacteristically good.

The best part of the book, though, is the concept. The world enjoys an age of light and good after a bitter war that saw all the forces of darkness and evil be defeated. The world is filled with happy people, no conflict, beautiful weather, lush vegetation. In a word, it is fucking boring. An unlikely party of evildoers gets together to save the world by bringing darkness back!

Alas, it was a concept that was not really well used. The characters, borrowed from classical fantasy, are "evil" by their professions only, but not by behaviour. Sam is an assassin, but he doesn't enjoy the suffering of his victims and is proud of his prowess. Archie is a mischievous thief, but other than that he is an OK fellow. Even Valerie, the dark sorceress, eats sentient beings just because it is her race's culture and her evil is more often artificial. Not to mention Blackmail, who acts as the classic stoic hero. Similarly, the forces of good are blood thirsty thugs that want to either kill everything dark or brainwash them, as a humane solution. This basically makes our heroes... err... heroes, not villains, and viceversa.

Now, the book wasn't bad. The style was amateurish, but it is Eve Forward's first book, after all. I could read it and I got caught by the story. I was more attracted to the original concept, though, and I was very curious how it would go. It is so difficult to present bad people as the protagonists, I know, because many people, including writers as they write, want them to be redeemed somehow. In the end, the moral of the story - excruciatingly laid out in a few paragraphs that shouldn't have existed - felt really heavy handed and simplistic. Ok, good people can do bad things and bad people can do good things, but it is important to explore what makes them good and bad, not just lazily assign them dark fantasy classes and be done with it.