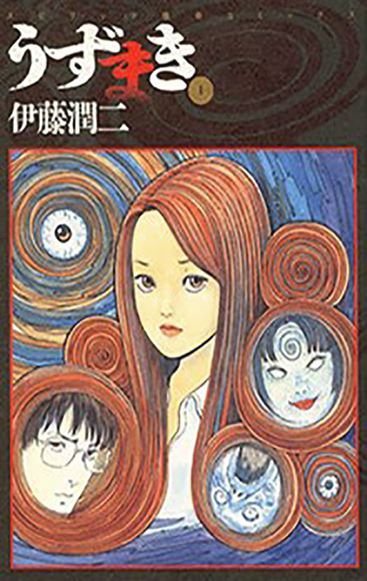 Junji Ito is a manga artist that creates horror, usually focused on personal obsession, body horror and disgust. He is like the Japanese Serge Brussolo, in a way. Uzumaki (translated as Spiral) is a 20 chapter story about a small town infested by spirals, which have more and more horrifying effects as the story unfolds (heh!). Yet perhaps the most horrible thing that transpires from the manga is the typical Japanese social and cultural pressure that keeps people in their place, in their role, denying that anything could be wrong.

I mean, in the beginning, people were leaving the town and coming back, noticing as they did how strange it was compared with the place they were coming from. Later on, the main characters see horrible things happening and still won't leave, while anyone who heard them explain what had happened - even if obvious to anyone looking - refused to accept that it was anything but rampant imagination. And, of course, they stop telling people things, because of the ultimate horror: being stigmatized in their society. That is true horror to me, that people would choose to live their lives like that. The way the town folk end up at the end seems to me like a metaphorical criticism of Japanese culture, but I may be wrong.

Anyway, the drawings are good, imaginative, and the manga succeeds in instilling that pervasive feeling of dread. The story gradually getting weirder and weirder, but in small increments, also manages to hold the reader on the edge of disbelief. Short, too, so no need to invest a lifetime in reading it.

If you want to read it, Uzumaki is freely available online, on the Junji Ito site, but also on a dedicated site that looks very similar, only with an extra bonus chapter, so I would go there. If you are a fan of horror, maybe Brussolo, maybe Lovecraft or even John Saul, I think you will enjoy this a lot.