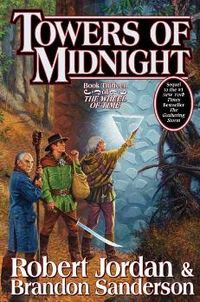 Towers of Midnight, the 13th book in the Wheel of Time series and the book before last in the saga, was a great read. As the second volume written by Brandon Sanderson after Robert Jordan's death, it benefited a lot from Sanderson's fluid writing style and the fact that all the stories are coming to their end.

The plot was interesting, too, with all three ta'veren characters doing their part, all the girls (except Nynaeve!) being involved and quite a few Forsaken as well, with interesting gimmicks the Darkfriend previously known as Luc and even a gholam!. The entire Trakand clan is represented and there are blessedly few Aiel. In this book Moiraine is found, there is some news of lovely and terrible Lanfear and someone dies (although, of course, nobody important and they die quite uselessly) while battling Aelfinn and Eelfinn, while The Final Battle approaches, with the revelation of red veilled dark Aiel?

My feeling of the book was one of discovery. Brandon Sanderson is writing this book with the enthusiasm of someone that just started work on a story (because he did!), yet with all the legacy material from Robert Jordan to build upon. No wonder the last part of the series was supposed to be just one book and resulted in three at the end. That means the story feels fresh, even if I have been reading it for the last four months. Also, it is no surprise that Sanderson could not maintain the fearful and deferential view of women that Jordan cultivated in the previous books. Oh, don't worry, they continue to meddle in all the affairs of others and their behaviour is just as erratic and irrational as before, it's just that men don't act like cowed idiots anymore and actually have a backbone. I don't know if this was supposed to happen in the original author's view, but I am willing to bet that it was not. Actually, this is one of the worse points of the story, when Elayne (the queen of Andor), Egwene (the Amyrlin seat) and Faille (Perrin's wife and princess of Saldaea) are plotting and acting like they own the world, while at the same time putting themselves in all sorts of dangers where they have to be saved by others. Of course, the others more often end up dead, but there is always some handy rationalization for behaving like an idiot. Amazingly enough, though, Cadsuane and even Moiraine are behaving quite well. The End must really be coming!

The bottom line is that I have finished reading the series. The last book won't be published until 2013, so now I am free to read other books. Yatta! I've gathered a technical book about refactoring, The Rites of Passage, by William Golding, and The Checklist Manifesto, which I hear is both instructive and interesting to read (not to mention short). So, I guess the wheel won't be turning as the wheel wants until next year. Meanwhile, you're stuck with me!

<p>Wow, well done man... Gotta give you props for tackling this series!</p>