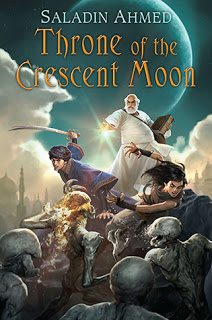 Throne of the Crescent Moon is basically a young adult novel, even if the main character is a fat old "ghul hunter" rather than his young apprentice. Its freshness comes from the elements of Arabic folklore used as the basis of the fantastic elements. For me reading the book was an interesting experience, as in my head the plot was blending with the stories of One Thousand and One Nights and the animation of Disney's Aladdin. I felt that Saladin Ahmed wrote some delicious characters, even if a bit shallow, and that the story didn't lose points because of its simplicity, rather the opposite. The result is an easy to finish book with Middle Eastern mythology themes in a classic good versus evil story.

The book this reminded me most of was The Spook's Apprentice, but with a different mythology and a different character focus. Just like that series, this can be considered a book for children, but having elements that are appealing to adults as well. To me the most pleasing aspect was the different culture presented, although it wasn't something very new to me. I was raised on stories of spoiled khalifs and evil viziers, young and noble rogues and beautiful girls and mysterious magics, after all. And probably a large element of why I enjoyed the story was this connection to my childhood.

While I can't say it was some sort of masterpiece, this was an entertaining book for me. If you are looking for a relaxing read, try this one.