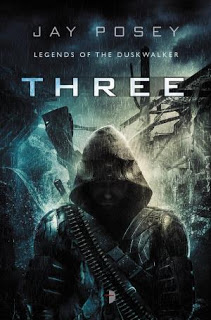 Three is a western. The fact that it happens in a post apocalyptic cyberpunk world is incidental. Jay Posey writes about the classical strong silent reluctant hero who fights for a good cause represented by a woman who has changed her ways and her innocent child. There are cyber zombies, there are evil pursuers and a world in which the strong survive in strongholds that are few and far between.

The book works because the writing is good and because the author never attempts to explain what happened to the world or how things actually work. It could have just as well been magic and pixie dust and the story would have remained basically unchanged. And unlike what the title of the review might indicate, you can read the book as a stand alone story, even if it has sequels. It had a beginning, a middle and a resolution.

Bottom line: an enjoyable book, albeit a bit predictable. Its strong suit is the good writing rather than a particularly smart idea or world building or even subtle characterization. Characters are kind of cardboard, but their actions and what happens around them is all well written. I don't think I will continue to read the series, but the author intrigues me and so I may read other books of his, like the new Outriders.