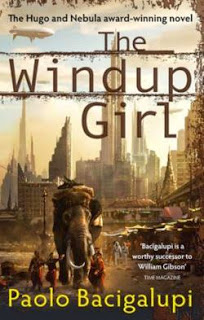 The Windup Girl, acclaimed by many as a very good book, shows a Thailand that Paolo Bacigalupi declares as "a future version", but given scientific realities I would call it an alternate world Thailand. Wikipedia calls the book "biopunk", although I wouldn't quite call it that way, either, as the bio bits in the book didn't feel absolutely necessary to the story; more of an eco-thriller, perhaps. The book takes place in a nation that is fighting the encroaching ocean, in a time where global warming is rampant and sea levels have risen. Also, there is no more oil, no real use of electricity or combustion and everything revolves around genetics. Large elephant derivations are used to generate power; "kink-springs", a sort of mechanical energy battery, are powering just about everything; cats have been engineered to color shift to blend into their environment; human derivatives have been created, sterile, but beautiful and always healthy, slaves for things varying from military use to sex toys. But the most important element of this strange world is the overwhelming power of genetic companies. The same ones who created successful and copyrighted versions of food crops, they also released horrible diseases onto the world, making their products the only viable alternative and creating a depopulation incident.

In the book, Thailand is one of the last countries to resist the "calorie companies" through a combination of cultural and religious fanaticism, but also with the help of a hidden seed bank and a defecting company geneticist. The country is rife with political and economical tension and the main characters of the book are all caught up in this large game. You have the artificially created girl who was left behind by the Japanese and now is a sex toy to be abused every day for the pleasure of others, the AgriGen company man, his only purpose to get his hands on the seed bank, the Chinese refugee from Malaysia, where the brown skinned Muslims took over the country by ethnically cleansing anybody else, the different Thai factions and their agents, all playing the field amongst the "innocent" population of Bangkok.

The thing is that the book is not really about the "windup" genetically engineered girl, but about this world that Bacigalupi is describing. The girl herself has a pivotal role in all of this, but she is merely a secondary actor. I feel like the author wanted to give this impression of all the characters of the book, that they are transient, unimportant, even the human race as a whole, even when they are the driving force of the events around them. A very Asian perspective from a European, I guess. The writing style is good and fluent and I rarely got bored, even when the events described were not terribly exciting. The plot focuses almost exclusively on people, with the technical or logistical aspects thrown in there as afterthought. I think this is what makes the book a good one, because any inconsistency with our own world can be easily dismissed, at least for lack of evidence.

Bottom line, The Windup Girl is a very nice book, well written by Paolo Bacigalupi to describe an alternate future version of Thailand. The fantastical elements of the book are there mostly for support of the story, which in its essence is not really science fiction. One could easily imagine the same plot in a real world country, maybe modern Thailand itself. But, if you are going to write a philosophical commentary about human society and our place in the world, why not place it in an imaginary universe, as well?