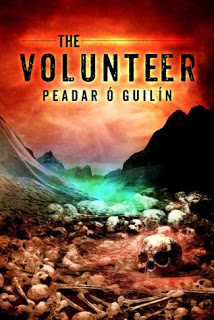 The Volunteer ends The Bone World trilogy. Badly. It's still better than the second book, The Deserter, but that had a plot that made some sort of sense. In contrast, in this book, Peadar Ó Guilín tries to combine the story paths of both Stopmouth and Wallbreaker, bringing together religious roof people, secular roof people, aliens and the original human tribe, each with their own psychotic would be leaders, while the world is slowly covered by Diggers.

While the world established on the surface of the planet was well thought of, The Roof was pretty much a disaster, so that is why the third book takes place on the surface again and is entertaining enough. Yet the interaction between people becomes confused, sub plots open that have no resolution (see the slime woman) and people just do random stuff that makes no sense. Even the characters chosen to die do so without consequence to the story, as if Ó Guilín didn't know which part of the story he wanted to write. The ending feels rushed and incomplete.

Bottom line: The idea of The Bone World is pretty interesting, but the story is not well realized. The first book is interesting enough, but the last two are not really worth it. If you want to read some Ó Guilín, read The Call.