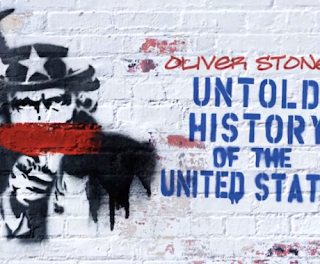 About 25 years ago I was getting Compton's Multimedia Encyclopedia CD-ROM as a gift from my father. Back then I had no Internet so I delved into what now seems impossibly boring, looking up facts, weird pictures, reading about this and that.

At one time I remember I found a timeline based feature that showed on a scrolling bar the main events of history. I am not much into history, I can tell you that, but for some reason I became fascinated with how events in American history in particular were lining up. So I extracted only those and, at the end, I presented my findings to my grandmother: America was an expanding empire, conquering, bullying, destabilizing, buying territory. I was really adamant that I had stumbled onto something, since the United States were supposed to be moral and good. Funny how a childhood of watching contraband US movies can make you believe that. My grandmother was not impressed and I, with the typical attention span of a child, abandoned any historical projects in the future.

Fast forward to now, when, looking for Oliver Stone to see what movies he has done lately, I stumble upon a TV Series documentary called The Untold History of the United States. You can find it in video format, but also as a companion book or audio book. While listening to the audio book I realized that Stone was talking about my childhood discovery, also disillusioned after a youth of believing the American propaganda, then going through the Vietnam war and realizing that history doesn't tell the same story as what is being circulated in classes and media now.

However, this is no childish project. The book takes us through the US history, skirting the good stuff and focusing on the bad. Yet it is not done in malice, as far as I could see, but in the spirit that this part of history is "untold", hidden from the average eye, and has to be revealed to all. Stone is a bit extremist in his views, but this is not a conspiracy theory book. It is filled with historical facts, arranged in order, backed by quotes from the people of the era. Most of all, it doesn't provide answers, but rather questions that the reader is invited to answer himself. Critics call it biased, but Stone himself admits that it is with intent. Other materials and tons of propaganda - the history of which is also presented in the book - more than cover the positive aspect of things. This is supposed to be a balancing force in a story that is almost always said from only one side.

The introductory chapter alone was terrifying, not only because of the forgotten atrocities committed by the US in the name of the almighty dollar and God, but also because of the similarities with the present. Almost exactly a century after the American occupation of the Philippines, we find the same situation in the Middle-East. Romanians happy with the US military base at Deveselu should perhaps check what happened to other countries that welcomed US bases on their territory. People swallowing immigration horror stories by the ton should perhaps find out more about a little film called Birth of a Nation, revolutionary in its technical creation and controversial - now - for telling the story of the heroic Ku-Klux-Klan riding to save white folk - especially poor defenseless women - from the savage negroes.

By no means I am calling this a true complete objective history, but the facts that it describes are chilling in their evil banality and unfortunately all true. The thesis of the film is that America is losing its republican founding fathers roots by behaving like an empire, good and moral only in tightly controlled and highly financed media and school curricula. It's hard not to see the similarities between US history a century ago and today, including the presidential candidates and their speeches. The only thing that has changed is the complete military and economic supremacy of the United States and the switch from territorial colonialism to economic colonialism. I am not usually interested in history, but this is a book worth reading.

I leave you with Oliver Stone's interview (the original video was removed by YouTube for some reason):