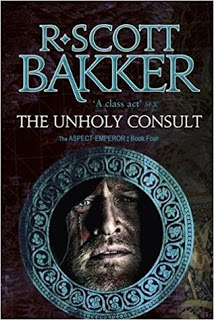 What the hell?! After starting with so much potential, the story started fizzling, but there still was a lot of room for greatness. Instead, Bakker seems to have contracted Martinitis for his last book in the series, having important characters die off randomly, insignificant ones suddenly pop up, and filling space with feudal descriptions of the battles fought by completely irrelevant characters. Oh, and talking about erect penises. And then the end comes, everything seems to come to some sort of confluence, only it actually doesn't. It all goes completely to the left. Things get confused, the story goes nowhere, and the reader goes to WTF land for the entire day.

What is the purpose of having the reader getting invested in characters, only to kill them off, then return them later on (oh, they didn't die!), only to have them do nothing or die (again!)? What is the point of reading the names of every leader of men and no-men while they battle gloriously, complete with a short description of these characters right before they die in said battle? Was this book written with dice?

The Unholy Consult is a complete disappointment of a series finale. It ends practically nothing! Consider that it all started with Drusas Achamian, as a learned, in love, slightly damaged magus who liked to consider the world with wisdom. At the end, he is a bumbling old buffoon who can't string a thought in his head. Esmenet, the ex-prostitute, chosen by Achamian for her beauty and by the Emperor for her intellect and strength for bearing his children, first rises to the challenge of being a queen, then is just hauled away like a child and just does random things. Mimara gives birth to twins. But one is dead. There is no significance to this at all, it's just a random event. The four horns... they appear and disappear in the plot, like they have some great significance, but they don't. Why write about one character almost a quarter of a book only to kill him randomly in the next? Why be so verbose for 95% of a book only to break out into incoherent scenes and inconsistent actions in the last tiny chapter?! And it goes on and on like that. There is no moral to the story, no resolution to the fact that we followed the action of a psychopath for twenty years of book time waiting for this precise ending, only to be robbed of any meaningful closure.

Bottom line: I guess the author has a "great vision" in mind. If Prince of Nothing was followed by The Aspect Emperor, then a new series of books follows which is, in fact, another volume of the story. Only I lost all interest. What is the point in following characters if the author is going to butcher them (and I don't mean kill them off) later on to the point of irrelevancy? What is the point of following a story, if it leads to nothing?