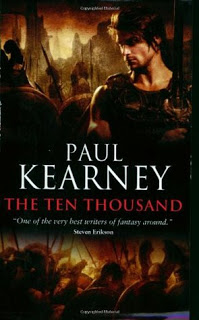 The Macht series is not related to anything Germanic, as the name might imply, but is instead inspired by the Greek Hoplites. Even if The Ten Thousand happens on another planet that has different continents and two moons and three intelligent races, Paul Kearney could have written it just as well as a historical novel set in ancient Greece, with Greek mercenaries getting hired by Persians as weapons in a civil war that went awry. In fact, the story really is inspired by an actual historical group called the Ten Thousand and the main character, with the unfortunate name of Rictus, seems to be inspired by that of real life Xenophon. The book seems to be a retelling of Anabasis.

Now, the story is well written and short. I read the whole thing in a day. It's like a 300 novel, with the courageous and lethal Macht force finding itself on a foreign continent, surrounded by overwhelming hostile forces and having to march through rough and deadly terrain in order to get home. There is a lot of fighting, technical and military, some romance, bro-mance and feudal politics, but it's essentially the story of a huge march seen through the eyes of an experienced soldier, but young and new to the mercenary troupe.

Bottom line: I don't know if I am going to read any other Macht book. This one felt self contained and I am not that much into ancient fights in the Bronze Age. I liked The Ten Thousand, though, and I recommend it as a short and captivating read.