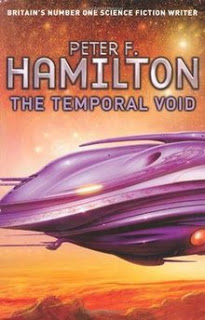 Wee! Another Peter F. Hamilton book has been published. This time it is the second part of the Void trilogy, an ongoing series set up in the Commonwealth saga universe, but much later. Many characters are rented from said saga, so it would be a good idea to read that one first. Besides, as is Hamilton's style, the second book starts abruptly from the end of the first one and ends abruptly awaiting the third part.

And, again, like in the Night's Dawn trilogy, the plot is a combination of stories, one set in the technological future of mankind and one in a feudal, fantasy like, universe. Hamilton's talent is to combine these two in a believable common narative. They are not so linked as in Night's Dawn and, I have to admit, I like the fantasy arch better, even if it is the classic Messiah myth. Maybe because it is not contiguous, but rather made up of small stories that have a beginning and an end.