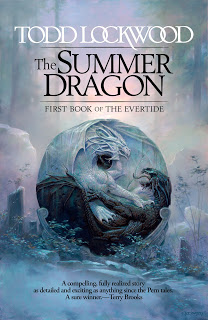 Sagas and trilogies be damned! The Summer Dragon was a really entertaining book and having it end as a mere episode in a larger story that hasn't been written yet is quite frustrating.

Todd Lockwood is mostly known for his fantasy illustrations, not writing, and Summer Dragon is his debut novel. It is an YA story, with a similar structure as so many others: young nobody discovers they have special abilities and are thrown in a world of mystery, wonder and danger, with adults being either weak supporting characters and/or villains, but done right! The heroine - yes, a girl - is thrown into a situation in which politics and culture are forcing her to either be completely passive and submissive or to take action by herself. She doesn't do it with superpowers, but with the knowledge she learned from her father and her own personal courage and ingenuity. In the end she does overcome some pretty insurmountable odds, but it never gets too annoying. If there is a flaw I have to talk about it is the fact that each chapter is written with the same hero's journey structure, with new tension added at the end and character building in the middle. The author is a bit too neat in following the writing guidelines.

I liked that the protagonist is a woman. This is, so far, a perfect feminist book, since she is fighting real issues, social, political and military, using her own skills and in the few situations where she is a love interest she doesn't automatically feel she needs to either reciprocate or condescend and insult her suitor. It is also a book about dragons, but she is the daughter of a dragon breeder, rather than a kid that suddenly discovers there are dragons or other crap like that. The world is not very detailed, but what is in the book is pretty consistent and has a lot of potential.

I don't want to spoil the book by giving details, but there was also something that I felt was a missed opportunity. In an already existing conflict a third party emerges, a super villain, if you will. It was the perfect moment to switch the real source of the "evil" and to reframe an existing war as something that no one participating really understood. As written, it is very difficult to understand why career military men locked in a prolonged conflict dismiss vital tactical and strategic information for silly things like religious fervor or personal greed.

Given the opportunity I would have immediately read the other books in the series. Alas, The Summer Dragon was released just last year and it's the only published book so far. If you want to avoid frustration, wait until Lockwood writes a few more books and then start reading the series. I have great hopes for it.