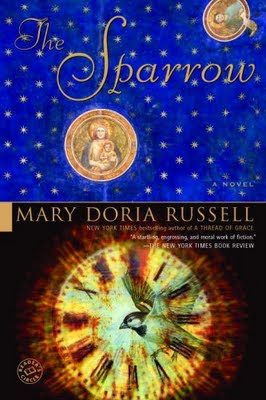 The Sparrow is, in my opinion, a good example of politics in literature, as it won several prestigious prizes, but is, in my own view, slightly above average. To quickly summarize the book, it's a Jesuit meets New World story, only the plot is set in the future and the new world is another planet.

Maybe I am just bitter because after tedious chapters about the relationships between the characters, the sci-fi was minimal and outdated. In fact, the author herself admitted that the kind of story she wanted to write could not be set on Earth because there are no new worlds here; this leads me to believe that the sci-fi was incidental and it bloody feels that way, too.

I will give credit where it is due, though. The woman documented herself well and presented interesting characters in great detail. Also the story itself is pretty solid, albeit a bit boring and focused too much on the religious. Other than that, it felt like a 1960's book. I was shocked to see that it was published in 1996. Some of the technical details described in the book were outdated even then.

About the plot, a discreet mission to a nearby planet is organized by the Jesuits, because all the other players in the field like the United Nation are too bureaucratic and talk about it more than actually doing something. The story starts with the return of the only survivor, priest Emilio Sandoz, and then the book continues with back and forth lines of now and then. The ending felt rushed and a bit anticlimactic. Maybe I was just not in an empathetic mood and couldn't care less about the religious and cultural sensitivities of the people involved and from all the characters, only Jimmy, the tall technical guy, felt agreeable. Who would have guessed? :)

Bottom line: I will not read the sequel book and that should say a lot. The book is not bad, though, and I may be berating it too much. A thing is certain, this is at the lower edge of the sci-fi scale, regardless of writing quality.

Update: In lack of a good book to read, I started on Children of God, the sequel to The Sparrow. Russell's talent for tedium, futile philosophy and rape fantasies reaches new heights in this book, so much that I just couldn't finish it. I usually finish watching movies and reading books even if they are bad, just for the experiential value alone, but I couldn't do it with this one. You have the same pointless priest, wallowing in self pity and then pathetically letting himself be used again, all the time asserting that he won't. And just so the reader would have no thoughts that the man could find a way out, a chapter of one of his kidnappers getting old on Rakhat, smack in the middle of the book, erases that possibility. What would be the point of reading on? Just for the ridiculous discussions about different Gods between random people? No. Just avoid this one.