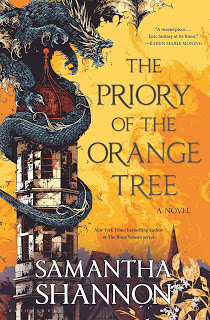 The Priory of the Orange Tree is a typical fantasy story, with realms, heroes, heroines, dragons, magic and the mandatory evil one. It is a large book, that others would have made a trilogy out of; considering it is a single story, I find it most honest that the author published it directly. Samantha Shannon writes really great for a 27 year old and considering she already has under her belt a seven book deal under which she already published four (The Bone Season series), she seems to be doing good. People even hailed her as the next J.K.Rowling, which I personally would think it feels annoying rather than flattering.

So what is the book about? There are several countries with different religions that all stem from the same event: the bounding of The Nameless One, a huge evil dragon with intents to conquer the world. Some think all dragons are evil, some think dragons are cool, some think only some dragons are evil and the others are gods, and so on. There are conflicting stories about who is the hero that defeated evil a millennium ago, too. And of course, evil is stirring once again and a new generation of heroes rises to the occasion. They are mostly female, although some males are prominent in the story. Also, at least three characters are gay and one may be asexual.

About the gay thing, I found it not annoying. Although major events of the plot depend on the love towards another person of the same sex, it wasn't forced towards the reader and it didn't feel like it was glue added to the story. But it was also funny, because in the whole book romance is either gay or really short, chaste, doomed or kind of second rank. I imagine this is how a gay person reads a straight romantic story, where homosexuality exists on a conceptual level at best.

The point is that the story is not difficult at all, except at the beginning when you have to get acquainted with too many characters in too many countries all at once. Then it just flows, sometimes a little bit too smoothly, towards the predictable end. I read it all in a weekend. The main characters are complex and competent, although the minor ones are kind of one dimensional. If anything, I was disappointed with the villains. They were cartoonish, almost. I mean, the most evil of them all was called The Nameless One, like some extra that has one line in a public bathroom in a movie: "the guy in the bathroom". He didn't even have a "same thing we do every thousand years, Pinkie!" moment. Lazy as hell, all the dirty deeds were done by his henchmen... errr henchfolk? And that ending...

Bottom line: nice story to read, above average clearly, but not something to be amazed by.