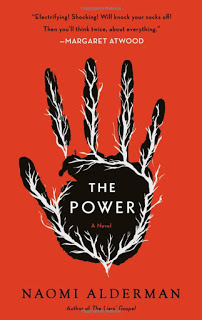 The Power started strong and then it fizzled. The idea is intriguing: what if all of the sudden women would get a power that would change the balance between men and women. Men have muscles, women have the power of electricity at their fingertips. The whole book is about the effect this would have on society and, highly recommended by Margaret Atwood, I've decided to read it.

Unfortunately, Naomi Alderman is not going places with the idea. It takes a special kind of person to write a book about how the fate of the world would unfold, but not be able to describe even one meaningful relationship between men and women. And with that gaping absence comes a scenario that is pretty difficult to swallow. Having the power of electric eels, women in Saudi Arabia, Iran, African countries and most of all, dark Moldova, where the entire south of the country is just about caging, selling and using women, gang up together to overthrow the rule of man. Forget about simple and cheap solutions against electricity, forget about how no amount of electrical power could rival guns, tanks, gas or bombs, forget even about the terribly naive view of a neighboring country (I am Romanian), but what about the fathers, husbands, sons of all those women? In this book, once women get a taste of power, they immediately turn into electric monkeys, changing their culture, their beliefs and their entire identity in one fell sweep. They stay together in huge mobs, create countries for themselves and even consider killing all men except the ones they keep for breeding. There is little mention of families, men or any significant human response to such a policy. I couldn't help thinking of the Battlestar Galactica quote: "Slaves dream not of freedom, but of becoming masters".

You will probabaly think of another similar story, The Handmaid's Tale, but there is subtlety in that book. Women are not oppressed by men directly, but by their fellow women who bought into the thing. The religious fervor touches all aspects of society, including family, commerce, politics. In The Power, it's like men exist for no other reason than to rape, beat and abuse women. The only good guys in the story believe women really should rule the world and that their time was long in coming.

So to summarize it all: this is a lazy book, filled with personal ideas about how the world is that bear little resemblance to reality, therefore difficult to follow with any interest. The writing is professional, but the characters are cardboard, single drive creatures, and rarely sympathetic. What would have been the most important part of the book: the relationships between men and women or families, are either absent or naive and focused on power games. It has more in common with Planet of the Apes than to Handmaid's Tale.