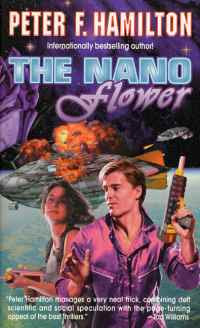 Something happened to Peter F. Hamilton between the second and third volumes of the Greg Mandel trilogy. He turned from a good average writing style to a great one. The Nano Flower is almost at the same level as Pandora's Star and births Hamilton's detailed universe. No wonder there was no fourth novel in the series, it would only drag the writer down.

The book has everything I came to expect from Peter F. Hamilton: hard sci-fi, detailed socio-political context, aliens, the party of braves, the sociopathic villains, a reference to Lord of the Rings... I do believe that Tolkien inspired Hamilton to write, but now it has become the chink in the writing armour, Achilles' heal. I've read a few great Hamilton books, but each had the basic layout of a battle between good and evil, groups of people uniting under improbable ideals to defeat an all too dark a villain. The qualities that attracted so many people to Lord of the Rings, for example, like camaraderie, honor, desire to help others, are not so attractive to me anymore. They are basic, very unlikely to truly define a character. I would very much want to see a Hamilton gray book. Maybe the new Void Trilogy will fulfil my wish (if I don't die of waiting for it to appear), although the vengeance driven character that remains pure and good at heart described in the first volume doesn't give me a lot of hope.

Anyway, even if I do seem to concentrate on what I don't like or what I would change in the writing of this great book maker, my appreciation for him is way higher than any possible defect in his writing. So, if you don't totally dislike sci-fi, go to a book store and buy Peter F. Hamilton books.