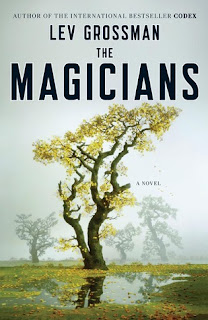 I'm seeing a pattern here already. After The Expanse, which surprised me with how good the TV show was compared to the books, now The Magicians does the same. There is something to be said about hindsight and when you are adapting a series of books for the small screen you get a lot of resources that the writer himself did not have when he began. I have a feeling that many things that happened in the first season of the TV series will not even happen in the second book. The plot has been changed as well, quite a lot, to the point that now I will be reviewing a book that has at most half of it to do with what you might have seen on TV and another half that you probably won't see even in the future.

In The Magicians, the first book in the series with the same name, Lev Grossman describes a pretty dorky character suddenly finding that magic is real and he is a magician. But while it starts like the typical fantasy story, it continues quite differently, with a school of magic that doesn't seem to care about its students much, a way of learning and doing magic that is never quite explained, but described as tedious and difficult, and an overall depressing view on the world. The main character isn't even very heroic, quite the opposite, he really does think and feel like a 'dork'. If anything, he is a coward and a person who's few feelings are confused and pretty much self involved. His friends are none the better and the entire thing soon started to take a toll on me, who failed to empathize with anything and anybody.

Another issue with the book is that it is rarely consistent. Things happen without much explanation and then they turn into others. Modern culture references mix with awe of magic and then seriously fucked up shit, only to slip into irony or even slapstick comedy. It gets the reader curious about what is going to happen next, but always on the brink of "why am I reading this?". Myself I am sometimes completely engrossed in a bit of the story only to see it end abruptly and leading to nowhere. Doors to other realms are opened and nobody really cares for it for any reason other than to become kings and party all the time. People die or characters do some really shitty things, but the others are all calm and going on with their lives.

So yeah, I don't know if I should recommend the books yet. The show is levels of magnitude better so far, in story, consistency and character development. Even if I could buy into the whole borderline autistic asshole of a main character, which I was ready to, the sudden and often context switch made me really difficult for me to enjoy the series so far. However it is original and I have not read a book that sees the world quite in the same way. If you are tired of the same old fantasy stuff, The Magicians is a bit more adult and hard to put in a clear box, touching real young people topics, like sexuality, alcohol, drugs, depression, uncertainty, the search for happiness.