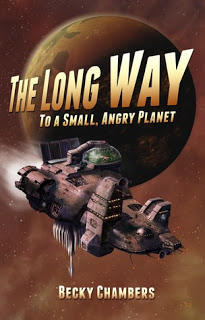 I think I am way too trusting of book reviews, as I was with the one from Andrew Liptak about Becky Chambers' debut book The Long Way to a Small, Angry Planet. He said it was the most fun space opera book he'd read last year and the review was published in September, so I just automatically added it to my list without reading further for fear of spoilers. It was a bad idea.

The book is the space opera version of romance novels. There is a ship run by a quirky team of multispecies crew on their way toward a planet that is to become the interface point between the galactic federation analog and a new species of warring and incomprehensible aliens. So far so good. The problem is that the book is all about the one year trip there with the focus solely on the personal histories, dramas and emotions of the crew members. They fall in love with each other, they transgress stupid specieist prejudice, love conquers all, that sort of thing. Then the book ends, with everybody nicely paired and friendly towards everyone else. That's it. I mean, that is literally it. The book ends when one is already bored to death and waiting for some interesting stuff to happen. And it never does!

While I have to admit that 50 Shades of Grey was way worse and sold a lot better, that is in no way a recommendation to read this book. It is technically obsolete, morally ridiculous and abhorrently politically correct. It becomes pathetic to see how the author attempts to justify interspecies romance and sex and to condemn biases about other sentients, even inventing new pronouns, only to fall into other more boring clichés about what our future society should be like and how people should behave with one another and how nasty people look (unkempt fair skinned dark haired antisocial techs or chitinous insect like creatures) and how inner beauty translates to outer beauty and the making of easy friends and so on. It felt like a highschool story with aliens. I mean there was a moment when their ship is boarded by pirates and the resolution is to politely talk to them and reach an agreement, because this particular species was culturally bound to only take what they need and no more. Really?

Bottom line: it is a puerile make believe fairy tale about space lovers which has almost no science in it. It is a another fantasy novel that tries to trick readers in by posing as science-fiction, only it is a romance fantasy novel. And if you are eager to read passages of interracial space sex, forget it, the most controversial word you will see printed in this book is "banging" and I believe it is used but once.