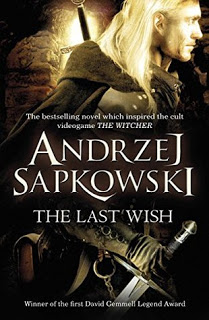 The Last Wish is not what I expected. I liked the Witcher games reasonably well, but I liked the character in the stories of the games more than the one in this book. Andrzej Sapkowski creates this character who is trained by pain, knowledge, poison and discipline to become the ultimate monster killer. However, the result is a very ordinary person, one who is better at fighting and resisting various magic or chemical attacks, but still a regular dude. He has friends, he falls in love and has moral qualms, he gets defeated and knocked out.

The book is actually a collection of short stories with Geralt the witcher as the main character. Some are reimaginings of classical folk tales, but all of them are about real versus perceived monsters. Is something huge with dagger like teeth a monster to be killed or is there a cursed person inside. Is a normal human less monstrous just because he looks normal, or is he a cruel and vicious villain? In all stories there is a lot of dialog, with characters that are not clearly developed talking a lot about what is going on. I didn't like that. It felt like reading plays.

But even so, I would have said that the book is OK. Like someone trying to write a fairy tale of their own. Why not? But there was this expectation from the games that the witcher was a womanizer that decides who lives and who dies based on his own strange code and lives on the edge by the strength of his skill. In fact, in the books he is the most decent hero I've read about in a while. He is one of the last of a dying breed, like samurai or American native warriors, not because of the monsters that kill them off, but because of humans spreading everywhere and expecting everyone to live by their code of conduct. If he would kill all the monsters in the world, he would be the very next to be destroyed by the people who no longer need him and have always hated him. Let me tell you that it is hard to reconcile my expectations with the book character.

Bottom line: an OK book. Certainly not great in any respect. I recommend you read it before researching the character or playing the games. I think that the book makes the games more interesting, by adding a backdrop story, but the games make the story hard to enjoy... because they are simply better.