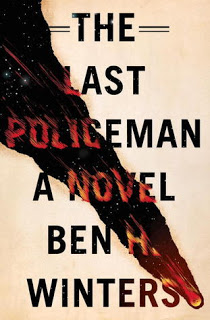 This book was recommended by Jeff Atwood, of Coding Horror and Stack Overflow fame. He liked it, I wasn't impressed. In The Last Policeman, Ben H. Winters attempts to describe a world that is powerlessly waiting for the arrival and impact of a 7km wide asteroid. While smaller than the one that killed the dinosaurs off, it would still pretty much end human civilization and most of the life on Earth. As a result, people are killing themselves in depression, quit jobs to "go bucket list", nothing is working, nothing gets repaired, etc. In all of this, a detective is trying to solve a case that looks like just another suicide, but he feels it's not. It is an interesting concept and it was well written by Winters, but I had difficulty believing in the world he was describing. More than that, except rumors of something Iran is planning there is no mention of any other country. I believe that in this situation a lot of people would inertially and routinely continue what they were doing until they figured out that it doesn't make sense (and that probably it didn't make sense to begin with), but there would certainly be more aggressive social changes that the author completely ignores. Plus that "going bucket list" would certainly become frustrating once you can't go on a cruise because no one is sailing the thing or you can't enjoy your favorite food because the restaurant got closed.

Worse than that, at the end of the book I was pretty satisfied with it. It was short, to the point and while not perfect, it was enjoyable. And then I learn that it is part of a trilogy. This automatically diminishes the act of reading it somehow and the book entire by the fact that I can't convince myself to read the other two books. So yeah, bottom line: I thought it was kind of average.