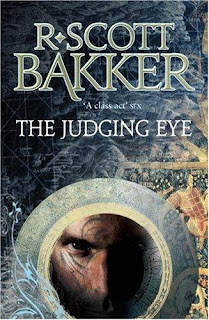 The Prince of Nothing trilogy was a total masterpiece, full of harrowing experiences of flawed men and women and characters so deep and original that they defied belief. You get the godlike Kellhus, not only freezingly rational and intelligent, but also mastering the Gnosis, the art of magic, while being a textbook example of a charismatic psychopath. You get Akkamian, a worldly sorcerer and spy, a teacher and a hopeless romantic. You get Cnaiür, a monstrous barbarian driven by revenge, but trapped by love. Esmenet, the whore empress mother, being heartbreakingly and treacherously a woman. And all these complex characters get to live in an epic world of different cultures, with politics, and military campaigns and evil creatures serving the No-god, shape shifting assassins and magic schools. In fact, it was so great that I found myself feeling dread of reading more, so terrifying the deep and personal pain of the characters that it was becoming mine.

Now I have finished The Judging Eye, the first book of the Aspect-Emperor trilogy, itself no more than a direct continuation of Prince of Nothing. R. Scott Bakker kind of cheats by using the same basic scaffolding for this story: a military campaign where an innocent and sympathetic character is being eroded by Kellhus' influence, a dark character driven by revenge on a lonely and dangerous quest, against himself slowly warming himself to the presence of a woman, court machinations driven by self serving creatures and the general backdrop of a clash between religions. He does it masterfully, though, switching the characters around and adding new ones to fill the roles left empty. In The Judging Eye one gets something as similar to The Darkness That Comes Before as needed to please the crowds that enjoyed Prince of Nothing, but as different to make it a completely different story. You get more of the same, so to speak, with an emphasis on 'more'. But also a little bit less.

Not everything is perfect. I feel that the inner dialogues of the characters have become more opaque, more strained. The metaphors flow just as in the previous books, but they communicate less, one makes more of an effort to get them and feel what the author meant, giving it a slight air of pompousness. I mean even a little kid philosophizes more than all the adults I know. The book has slightly more action scenes than I remember in Prince of Nothing, but they also feel more confusing. For all of Bakker's talent, I think he doesn't really understand combat and physical violence. He more than compensates with emotional and visceral violence, I agree, but I can't stop myself thinking of all the tactical applications that were never explored in battles purportedly fought by hardened veteran mercenaries.

His biggest sin, I believe, is that he doesn't follow through with the revelations that he awards the reader. I remember he was doing something similar in Prince of Nothing as well. He takes one through the labyrinthine mental processes of a character that marches uneventfully, but he fails to explain what exactly is happening - or at least what the characters are thinking - when something extraordinary happens. For example, in one scene, they discover a crazed individual with an eye on his heart, driven mad by the darkness that his heart is plunged into. A very powerful image. Yet Bakker doesn't explain anything. How was that possible? How did Akka know to look at his heart? What the hell were hordes of Sranc doing in a sterile dead mountain tunnel? No, instead we get to read about every single internal thought that the characters have about themselves and their lives. To quote from the book: "the work of a race that has gone insane for staring inward".

Bottom line: there is so much introspection in this book that barely anything happens. Falling into his own trap, Bakker gets seduced by his characters to the point of ignoring the universe in which they live. The book remains incredibly good and so I will venture to read the next one in the series. I already lament the fact that the third book of the Aspect-Emperor is not yet published and dread the moment when I will finish the second.