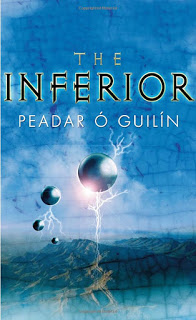 I've started reading The Bone World trilogy because I had already read The Gray Land series and I liked it. And while The Bone World made Peadar Ó Guilín famous, it is not at the level of character development and personal involvement as The Call, yet it is still good enough.

The title of the book, The Inferior, is sort of a pun, as it refers both to a physical position and a social one and is probably a word play on "the interior". There is this world in which the only living creatures are moss like plants, some trees and insects and tribes of intelligent human sized creatures. However, their societal development is stuck at the level of the Stone Age, with their only concern being killing and eating each other. You might say that such an ecosystem could not be sustainable, and you would be right, if you didn't account for the fact that this world is under an artificial roof that acts like a sky and light source and is patrolled by strange flying orbs and whenever a tribe dies, it is immediately replaced by another, of another species, appearing suddenly in flash of light, only to either eat or be eaten.

Now, the concept and the plot are not airtight, but they don't need to be, as you revel in the life and exploits of Stopmouth, a young and smart warrior of the human tribe. One can see where the body horror that permeates The Call came from, as this world is also filled with abominations doing abominable things. Strangely enough, it is the "civilized" people that are not well defined, stuck between a mere plot device at worst and an inconsistently written set of characters at best.

Bottom line: while not a masterpiece and having the cannibalism and body horror being the only things keeping it from becoming another long lived and mindless YA TV series, it is interesting enough and well written enough to keep one going. I intend to finish the trilogy, another reason for me having started reading it being that it is a done deal, with no other book in planning.