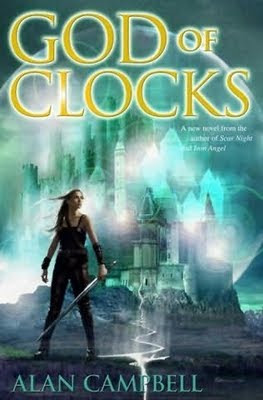 The last book (in story time) in the Deepgate Codex series, God of Clocks was a huge disappointment. It started nicely enough, preparing us for epic battles of wit and weirdness. Reading it, I was about to forget all about the slight drop in quality in the second book, Iron Angel, and was preparing for something grand. Then Mr. Campbell did what he never should have done: he altered the time space continuum. Before I knew it I was thinking at that old sci-fi movie where a ship boards another ship while in hyperspace and because of chaotical relativistic effects they all end up getting old, then young, then meeting themselves, fighting along their older grandsons, fighting the enemy with sticks and so on. For the love of God, I don't remember the name and I did Google it, but got only crap pages.

Anyway, Mr. Campbell, haven't you watched sci fi movies until now? Haven't you read a lot of SF books that make the same mistake, drowning in their own pool of possibilities. Time travel, unless it is the main subject, always messes up a story. And I was already confused with all the gods that were nothing more than angels with over inflated egos that anyone could capture and kill, the assassin that turned into mother-do-good, the boy demon who thought John Anchor was his father and that little child that is older and more powerful than him... so all this became very jumbled. No wonder a lot of the threads just remained hanging. What happened to Devon? Who the hell was the little girl? What did Carnival do? Everything just got negated by a race towards the beginning of time, when Ayen blocked the gates of Heaven. And then poof! A lot of fast scan scenes and the book ended. The fight never took place, or if it did, it was never described. And don't worry, if you preferred any other ending, there must be a broken timeline floating like a disolving icecube in a water glass that you can climb on and enjoy whatever reality you desire.

This book must be one of the most (if not THE most) WTF book I have ever read. In the end I was pacing, swearing and regretting my lost time. If the Deepgate Codex series would have been a video game, it would have never been released, with all the lack of documentation and obvious bugs.

My conclusion: what a nice beginning with Scar Night, but what a faltering fiasco up to and through God of Clocks. It did manage to make me think of a book where the main character would be Carnival, and all the rest would be just detail. I just loved her character and I feel so unfulfilled because it was never properly developed.