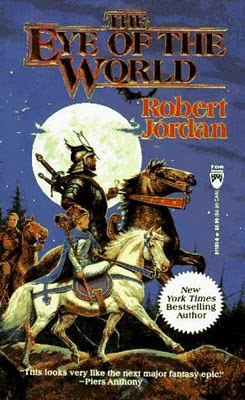 The Eye of the World is the first book in the series called The Wheel of Time, by Robert Jordan. Written in 1983, it is very similar to Lord of the Rings. It features a complex world of nations and races with their own languages and cool sounding names, a battle of good light versus evil dark that is so ridiculously polarized that at first I thought I couldn't finish the book, a party of different people in which the main character is a poor country sheppard boy, a quest that has the goal of saving the world via a long trek of personal transformation.

Actually, if I think about it, it seems almost entirely inspired by Lord of the Rings, with none of the innovations that appeared since playing any effect except maybe The Chronicles of Thomas Covenant the Unbeliever, when describing the Blight. Something that is clearly different in the book is the role of women.

While Tolkien had them placed high on a pedestal, queens and princesses that were supposed to inspire men but not be touched, Jordan presents them as important members of the party, with Moraine, the "wizard", holding most of the authority. Actually, it goes further than that, giving all women characters an almost indomitable ability to influence men. Only one female in the entire book is evil, and that for a very brief period of time, and none of them are weak in any way. It doesn't even matter much that The One Power has two sides, one female and one male, and that the male is tainted by The Dark One. Even if they would have magical power, men are doomed to be ruled by women in The Eye of the World and probably the rest of the books.

The evil Shai'tan is a dark entity with burning eyes and eternal rage, imprisoned yet powerful, corrupting everything he touches, while the power that opposes him is white pure light that heals, purifies and avenges. The only shred of ambiguity comes in the shape of The Children of the Light, a warrior sect dedicated to fight evil, but that are nothing more than pompous gang members that define evil as anything they don't like.

All and all the book was pleasant enough and, being December, I plan on reading at least the next book in the series before I start with a technical one. However, it doesn't come close to most of the books I've read recently. The simple design and clear inspiration is probably the reason why they want to adapt the story to television, now that the likes of Game of Thrones have shown the model successful. If the quality of the books does not improve in time, it may be so that it would be more effective to wait for the films instead of reading the book. Then again, I will make up my mind after I've read more. I have hope.