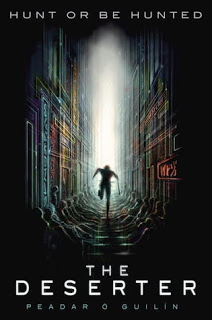 If The Inferior was OK, The Deserter, the second book in The Bone World trilogy, is quite weak. The story continues with Stopmouth trying to get to the surface to get to Indrani, and while he does get there, it's not really his merit. And when he finally arrives, the world there is just as dumb and savage as the one beneath.

I really dig (pun intended) the way Peadar Ó Guilín writes about societies and people. His writing has a sort of Shakespearean quality, where everybody is looking for themselves and backstabbing everybody else, no matter how horrible or dishonorable it is. However, his hi-tech writing leaves a lot to be desired. The plot holes that were apparent in the first book, but that hinted on a technological answer from The Roof, become larger when we finally get to see it. Highly dependent on machines that do everything for them, the "civilized" people are divided into tribes that fight each other for no good reason. It is a general theme in the author's writing that people gather in tribes or churches or states or gangs with the singular purpose to blame everything on another group and then try to destroy them. However the society in The Roof doesn't make sense in almost every respect.

There is a sci-fi sub-genre, that of the uncivilized but pure reaching a civilized place and overcoming everything through strength, be it physical, moral or both, and the works from it usually are weak. The Deserter is no exception, I am afraid. In a book where information is so essential for survival, the people in The Roof know nothing, care for nothing except their stupid squabbles and are completely lost without technology. It is hard to empathize with anyone in this book that feels like filler content until the third book, which also takes place on the Inferior.

Bottom line: I've read it quickly, in order to get to The Volunteer. In my eyes, The Deserter was a disappointment.