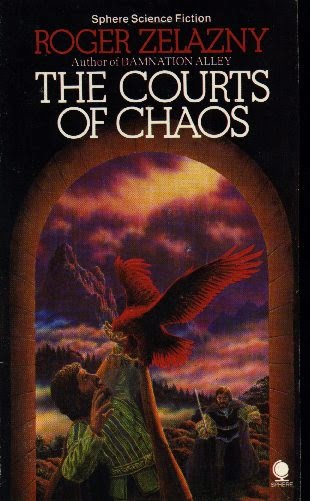 And thus ends the fifth book in the Chronicles of Amber, and the last in the Corwin cycle. Written between 1970 and 1978 by Roger Zelazny, it was one of the most lazy fantasy series I've read so far. The Courts of Chaos is once again a book that has no connection with its title. Nothing really happens in the courts of chaos except at the very end. All previous developments in the story are discarded completely and it feels like the author slept through writing the book. It was one of the most WTF books in the series so far, as well. At every section there was at least one scene where I felt like those people watching football games and shouting at their TV about what the player should have done.

Let me give you some examples. The book itself starts with a circular time paradox, where we get to see Corwin cut off Benedict's artificial arm. This had already happened in the previous book, but from the other perspective. Thus the metallic arm was only there to be severed because it has been severed in the past, its origins non existent. Then each of the children are given orders by their father. Why would they listen to them is beyond me, as was his entire reason for leaving, reappearing, etc. Anyway, he sends Corwin on a quest to carry the Jewel of Judgement (nobody did any judgement with that stone!!) to the courts of chaos, where Benedict already went using a trump card. Of course, why call Corwin's grandfather to make another card so that he can get there instantaneously? Why indeed. So we are exposed to this totally boring expedition where people fight like children with swords and crossbows and throwing rocks at each other. No guns, of course, that would be cheating. When Corwin uses a stone to make his enemy drop his crossbow, he ignores the crossbow and almost dies in the process. When he gets to the crossbow again, he smashes it! Why use a ranged weapon at all? Oberon made a blood raven out of a bit of Corwin's blood, to accompany and protect him in shadow. Why not make a bloody (pun intended) army of ravens? Wouldn't that have been better? And it just goes on and on. They never use the cards in this book, for example, after it was already obvious they can be used as communication devices as well as offensive weapons.

Nothing really made sense, in a nutshell. I am pretty convinced Zelazny was stoned out of his mind when he wrote this, but with some bad shit, since it never seems to increase his creativity. The ending was like a slap in the face, as after their victory, using armies of pedestrians and cavalry, a funeral procession for Oberon appears out of nowhere, with a lot of people and dragons. I kid you not, they had dragons, but their only use was decorative, like some sort of Chinatown celebration paper-mache things. And they got there not by treading the land like idiot Corwin, they actually came directly there. Oh, and since Corwin didn't feel like being king, they crowned another brother. Who, you might ask? Is it the brilliant strategist Benedict? Is it the loyal and strong Gerard? Is it the devious and aloof Julian? No, it's totally Random (another pun, couldn't help myself).

The next book in the series is the first in the Merlin cycle and the first book was written in 1986. It gives me hope that in 10 years Zelazny learned to fucking write!