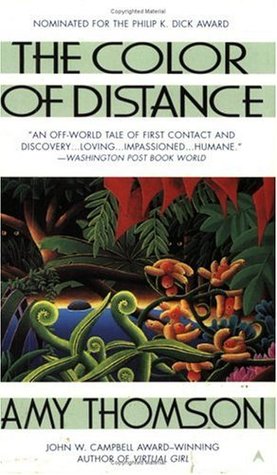 I got this book because I heard it was good and the synopsis reminded me of the Xenogenesis series by Octavia Butler, which I liked, despite its global rape undertones. In fact, The Color of Distance is also about a woman changed by aliens to be more like them, but it is an overly positive story.

Amy Thomson tells the story of Juna, left behind for dead after a shuttle crash on an alien planet inhabited by non technological beings that have deep social connections and the ability to see and change things at a very fine level inside living creatures. Thus set up, the only possible direction for the plot is that the aliens save Juna, remaking her in order to be able to survive in their world.

From then on, things could have gotten really nasty. Think Shogun, or Xenogenesis, or The Sparrow for that matter, since I've mentioned rapey things. But no, the aliens are amazingly benign and there is a "noble savage" beauty in their calm and harmonious world that should teach us something. In fact, I was hearing Thomson's voice ever couple of chapters whispering "Hey! This should really teach us something!". It wasn't as heavy handed as that, but I felt it a bit.

The lack of real conflict and only a few almost technical problems to solve made it a bit boring, but as world building goes, it's pretty interesting. In fact, I thought the best part was then humans come back for Juna, where the book explores how people react after "going native" and coming back to their old environment. But this also was almost devoid of conflict or real issues.