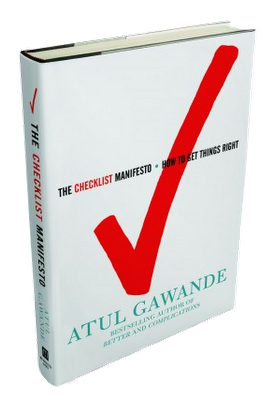 I think that The Checklist Manifesto is a book that every technical professional should read. It is simple to read, to the point and extremely useful. I first heard about it in a Scrum training and now, after reading it, I think it was the best thing that came out of it (and it was a pretty awesome training session). What is this book about, then? It is about a surgeon that researches the way a simple checklist can improve the daily routine in a multitude of domains, but mainly, of course, in surgery. And the results are astounding: a two fold reduction in operating room accidents and/or postoperatory infections and complications. Atul Gawande does not stop there, though, he uses examples from other fields to bring his point around, focusing a lot on the one that introduced the wide spread use of checklists: aviation.

There is a lot to learn from this book. I couldn't help always comparing what the author had to say about surgery with the job I am doing, software development, and with the Scrum system we are currently employing. I think that, given he would have heard of Scrum and the industrial management processes it evolved from, Gawande would have surely talked about it in the book. There is no technical field that could not benefit from this, including things like playing chess or one's daily routine. The main idea of the book is that checklists take care of the simple, dumb things that we have to do, in order to unclutter our brain for the complex and intuitive work. It enables self discipline and allows for unexpected increases in efficiency. I am certainly considering using in my own life some of the knowledge I gained, and not only at the workplace.

What I could skim from the book, things that I marked as worthy to remember:
I am ending this review with the two YouTube videos on how to use and how not to use the WHO Surgical Safety Checklist that Atul Gawande created for surgical team all around the globe.

<p>Carole, I've used and abused the opportunity you gave me. Thank you for thinking of me.</p>

<p>I was wondering whether you would be happy to put up a link in my brand new monthly series called “Books You Love”. The idea is for people to link up posts about a book they loved – it doesn’t have to be one they just posted about. It could be an old fave. I am hoping we will end up with a nice collection of books that can go on our reading lists. Here is the link <a href="http://caroleschatter.blogspot.co.nz/2012/05/books-you-loved-may-edition.html" rel="nofollow noopener" title="http://caroleschatter.blogspot.co.nz/2012/05/books-you-loved-may-edition.html"> Books You Loved May Edition </a></p>