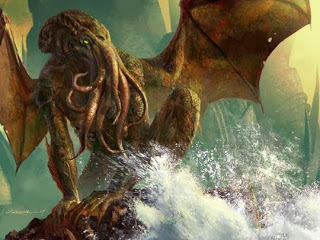 H.P.Lovecraft was one of the favourite writers in my childhood. I remember reading (some of) his stories and being mesmerised by the darkness and desolation of his writing, but also by the prospects of scientific inquiry "solving the puzzle" that layman minds cannot possible achieve.

The Call of Cthulhu was written in 1926 and is part of the Cthulu Mythos, which was started by Lovecraft but expanded by many of his writer friends and disciples. It presents the slow unravelling of a dark story by the heir of a deceased profesor. It is both thrilling and funny to discover the mindset of an upper class man from 1925, with some scientific prowess, trying to grasp the reality of slimy uncomprehensible ancient gods, waiting for their resurection from death, upon which the world will be destroyed by madness and horror.

That's about it. The guy finds some clues and follows them, bestowing upon the reader his strong emotions and easily disturbed victorian sensibilities. No meeting the monster, no special effects, no girls. It is so old a mentality, it is refreshing.

I couldn't rediscover the amazing feeling I had when I was a child, reading Lovecraft, but then again, I've grown a bit since then. Nevertheless, it is one of Lovecraft's most famous short stories and it is worth a read.