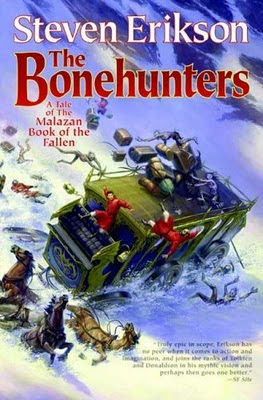 Oh, man, what a book this is. Steven Erikson uses a pattern in his epic Malazan Book of the Fallen series, with books that are standalone(ish) and others that continue the humongous story arches started in previous (or, indeed, later) books. The Bonehunters was heralded like a separate story, however that cannot be said to be true in any way. Old characters, patterns that evoke old stories, as is the birth of the Bonehunters, reminiscent of the Bridgeburners, and the sheer number of new characters, races and even gods make this book more of a hinge rather than a singular pillar in the epic. The number of open ended threads and unexplained new characters paves the way for the next four books. I am already starting to fear for the ending of the series.

What the book is about is difficult if not impossible to explain. It starts with a military campaign of punishment against the remnants of the Seven Cities army, but it ends suddenly and quite strange. The leadership of the elder Tavore sister unites the Malazans and binds them to her, in truth becoming hers and not merely an imperial army. There are strange machinations and moves from all the gods one can imagine, most of them hidden and quite hard to understand. What is even harder to explain is the way the empress allies herself with Mallick Rel and Korbolo Dom and starts rumours that make the Malazan population hate the Wickans, in truth war heroes of impecable honor. The ending is explosive but in no way final, leading the path onwards in the story.