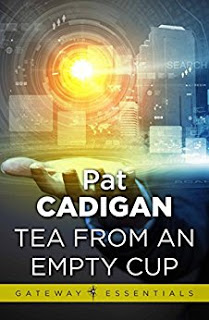 It was difficult for me to finish Tea From An Empty Cup. While it was a rather classic cyberpunk novel, which I usually enjoy, I felt it was obsolete in a way that could not be fixed. You know, like when designers or artists try to imagine how computers will be in the future. Only after reading it I realized it was written in 1998, so it was normal for that time and age to misunderstand how humans behave in networked environments, but still... even if the subject was a bit interesting, I actually had to make an effort to go through with it. I think the reason for why I didn't like the book was that the characters were paper thin. Concerned to describe a chaotic virtual reality world in which anything is possible and nothing is regulated (although everything is billed), Pat Cadigan forgot to make us feel anything for the protagonists. And considering that this is a story about how technology is affecting our perception of identity, it made the book unpalatable.

Imagine a Matrix in which people enter voluntarily because the real world is boring by comparison. They create their own intricate fantasies that go well beyond the basic human needs like food or sex and focus on social cues that the participants struggle to constantly redefine and grab for themselves. In this, Pat Cadigan was spot on. However, other than this simple idea that nowadays is ubiquitous on the Internet via the various social networks, the book is nothing but a boring detective story, complete with the "normal" policeman character that enters this virtual world as a complete noob and somehow solves the case. The action is very inconsistent and the feeling I got from the flow of the plot was one of a dream sequence where stuff is cool just by merely being defined as such. At no time while reading the book I was enticed by the scenes in the story.

The concepts inside the book are interesting, but explored very little. The author seems to be under the impression that by merely listing them, the story will somehow become interesting by association, an ironic parallel with the characters in the book. Just think that this book was published at the same time The Matrix movie was released. The difference in quality between the two stories is just too big.