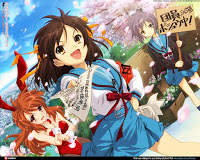 I took the name of the anime from a YouTube video, recommending it as one with a great twist in it. I watched for two episodes as the main protagonist, an ordinary guy in a Japanese highschool, starts talking to a strange girl (Haruhi Suzumiya) in his class, gets coopted in a mad scheme to create a club that investigates mysteries - specifically aliens, time travelers or espers, then adding the three other members of the club. I thought it was going to be about this club actually investigating something. But no, in the third episode we realize that the three other members are an alien, a time traveler and an esper. Soon after we find out that they know about each other and that each of them and, indeed, their entire race/organization were figments of Haruhi's imagination made reality. Haruhi apparently has the ability to create entire universes, essentially making her a goddess, albeit unknowingly.

So far so good, but then for 28 episodes I waited for anything interesting to happen. Where was that amazing twist? Apparently, the twist was that she was some supernatural phenomenon and that's it. The rest is just a typical cliched Japanese high-school story, the one where the lead character is a male boy surrounded by beautiful girls that have an almost undisclosed interest in him and that do crazy stuff together. When the last episode wasn't even closing the series, I got really mad. It was a complete waste of my time. Ugh!