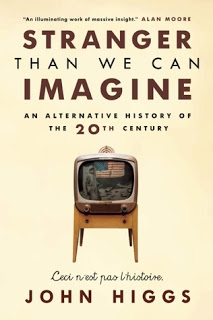 Stranger than we can Imagine feels like a companion book to the 2002 documentary The Century of the Self. Both are really well done and discuss the brusque changes that define the 20th century and they complement each other in content. I recommend them highly to just about everyone except maybe little children.

John Higgs starts the book comparing history to a landscape and the works describing it as maybe roads. There are well trodden paths on this landscape, but also deep forests where few dare enter. He then promises that his book will try to describe the twentieth century by exploring these dark places, avoided by others. I didn't feel that was completely the case, but certainly it was a novel path to take to explain history: Einstein, Heisenberg, Gödel, Lorenz, Mandelbrot, Freud, Picasso, Dalí, Joyce, Leary, Stravinsky, Crowley, Thatcher, The Rolling Stones, Miyamoto and so on. Its basic premise is that an abrupt change occurred at the beginning of the 20th century, when the general belief in absolutes (which he generically calls omphaloi) was replaced with relativism and individuality.

How would classical empires survive these changes when at their core stands the belief in a supreme leader, representing and supported by a supreme god, who protects and enforces rules that are culturally accepted by everyone? They would not, therefore the world wars that ended them. What absolute pillar of belief would survive general relativity, the uncertainty principle, quantum mechanics, the incompleteness theorems, the id and individualism, impressionism, cubism, modernism, postmodernism and finally, the corporation? None of them. Religion not so much dies as it breaks apart in small fragments that then fade away. Morality shakes under the reign of individual desires and psychopathic legal entities. Social norms, economical behavior, even the foundation of money are wiped out and replaced with the new. Art fractures as well, constantly redefining and contradicting itself and everything else. It is the century where value exists only when seen from certain perspectives and nothing has any intrinsic value.

The book ends with a chapter that heralds the coming of a new age, the 21st century: the Internet and the erosion of the last remaining omphalos: truth. If truth also depends on the observer, if there is no one truth, if science if just a belief like any others, what awaits us in the post-truth era?

Overall it is a very interesting and informative book. More than simply stating facts, it is the unexpected connections between things that bring value to the reader, rather fitting considering the subject. Maybe not going into the depths of dark forests, but certainly exploring their edges and the strange beings that live there. Top marks!