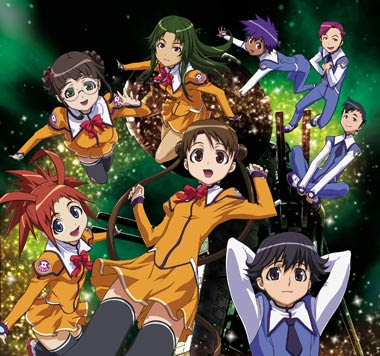 Stellvia is an anime with teenage kids saving the world. It starts like a kind of Harry Potter, only the main character is a girl, the academy is in space and there are no Voldermort or Slitherins in sight. All in all it was a fun series to watch, but so easy going and adolescent oriented that I am sure it will not remain in my memory for long.

The plot is simple enough: Earth was devastated by a supernova blast wave, it recovered, then it set out on a mission to defend the Solar System from the second wave, slower but deadlier. Their solution was to create a bunch of stellar academies, fill them with children trained by dedicated teachers, while the whole world stands united against this coming disaster. One can see from this plot alone that the focus is not on realism nor human nature. However, since it does touch all the Japanese topics of choice like pursuit of perfection, positive competition, love between school children and loyalty and "gabatte"-ness, it was nice to watch and I have easily enjoyed it.

Composed of 26 episodes, the series does leave room for more, like humanity exploring the stars. The aliens were never explained and the last episode does show a rebuilt Stellvia star academy with the trainees that saved the world as full students welcoming a new batch of recruits. However, it seems like a second season of Stellvia will never happen, due to creative differences.