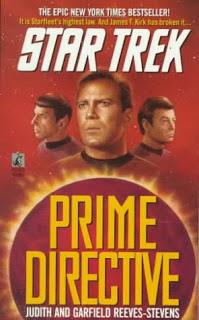 Another great Star Trek novel placed in the Kirk era, Star Trek Prime Directive keeps the reader/listener on the edge of their seat. It starts with a disgraced Kirk, a scattered crew and a scrapped Enterprise. It shows the dark, bureaucratic side of the Federation, cruel and merciless when you are not the lucky wearer of the golden captain uniform or, even better, an admiral. How did it come to this? The answer is both captivating, original and with deep roots in the Star Trek basic tenant: the Prime Directive.

I actually listened to the audiobook, also on YouTube (see embedded video), which was very well narrated. If I had any problems with the story was that it was clearly very biased. Kirk is always thinking of the poor alien species that are like humans, but seems to have no qualms to experiment with phaser fire and even slightly torture other alien beings if they are bug like. Also Spock seems very little a Vulcan in this.

Bottom line is that the idea was intriguing and original and the style of the writing was very good. One of the best ST novels so far.