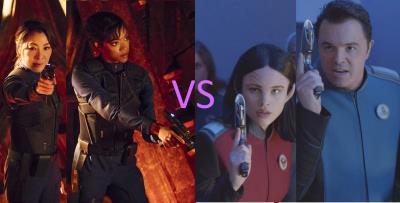 Hungry Trekkies, not nourished enough by the latest Star Trek movies, have been treated with not one, but two Star Trek series this fall. One is Star Trek: Discovery, the other is The Orville.

You may be incredulous at first, considering you are likely to not have heard of The Orville at all and, if you did, you thought it was a Star Trek parody. But no. Four episodes into the series it's pretty clear that this is a serious sci-fi opera, with some comedy added for spice. What about the new Star Trek series? Well, it's set before The Original Series, it has the visuals closer to the Abramsverse Star Trek (but without the flares, thank you very much), it has redesigned Klingons and a pretty impressive first two episodes.

It is too early to discuss the plot of Discovery yet as the premise hasn't even been revealed in its entirety. As of yet I can only tell you that I hate the main character. A human female raised by the Vulcans behaves in a way that makes one believe her education was acquired only from Vulcans in Pon Farr. CBS went all in and made the show available on their own CBS All Access network and hired actors like Michelle Yeoh to play in the pilot.

Conclusion: it may go either way, but right now The Orville seems to have done what I thought people would do: renounce the CBS/Paramount property and their money grabbing schemes, but keep faith with Gene Roddenberry's vision. Because that is the soul of Star Trek, not the money thrown by corporations to turn it into an all action and explosions piece of crap. Still, I have hope for Discovery as well. Only time will tell.

P.S. Now if they would only do Andromeda right...

I absolutely love Star Trek Discovery. And because I thought Deep Space Nine and Enterprise both sucked. And that JJ Abrams shit was even worse. This is something I&#39;ve been waiting for a very long time. And as for The Orville, I&#39;m enjoying the hell out of that too. Keep them coming please. Keep both of them coming.

Star Trek: Discovery I&#39;ve never paid for Star Trek on TV and never will. This show was doomed from the very beginning.