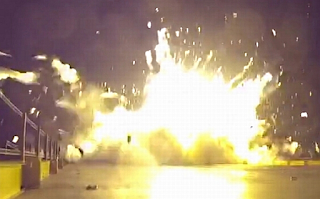 In January 2016 SpaceX made history by landing the first stage of a rocket that they have just launched. I know, Blue Origin did it first, but SpaceX rockets are designed for GEO orbits, while Bezos' reusable rocket is for LEO, so different animals. However, they have tried doing the same three times, last time just yesterday, only landing on a special barge at sea. Each time this have failed. But let's watch the three attempts, see what's going on.

First time, a year ago, January 2015, you can see that something was wrong with the way the stage came down, it was already angled and the horizontal speeds were really high.


Second time, three months later in April 2015, it almost got it right:


Third time, yesterday, 18 December 2016, it actually landed, then a landing leg gave out:


But what happened? Each time the stage reached the landing spot, each time in a vertical position and with low vertical speeds. Every time the engine exploded it did when the stage tried to stop and fell over. Wouldn't a specialized grabbing mechanism have prevented some of these accidents? Maybe even the first one!

Now, I understand that the purpose of SpaceX is to have a first stage that can land anywhere, and so they must rely on their device only, assuming nothing of the landing site, but once they go through the engineering issues, just catch it in a net, intersect three metal cables to support the upper part of the stage, do something. Look of those things, slowly falling down: you want to jump and catch them, like you would a drunken friend. Make your rocket understand it's not alone, Elon, that it's got our support! :)

Seriously now, I can't even imagine what would happen if the wind started blowing harder while the rocket tried to land on the barge. Since you have a specialized landing vehicle, make it better. The rocketry is fine, it is time to work on the support infrastructure with just as much aplomb and creativity.