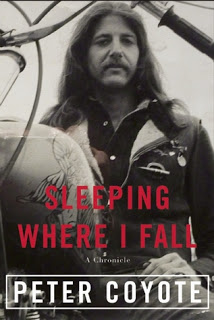 Sleeping Where I Fall is an autobiographical book from Peter Coyote. You might know him as a Hollywood actor, a man with a stern face, playing congressmen, detectives and conservative dads or other such people in authority. What you probably don't know is that before he was 40, when he decided he would try his hand at an acting career on the big screen, he was a "live off the land" hippie, a fervent believer in alternative cultures that eschew capital and personal property and value human connection and respect of the land and of the spirit, a man who chose his last name as most representing of himself. The guy on the cover is Peter Coyote, too. This book is an amazing recounting of those times, one of the works that I believe need to be read, whether you like them or not.

Personally, I found it amazing. It's not the writing style or how it played with emotions, but the information buried within that makes it a valuable experience reading it. In fact, if I was to critique anything about it, it is that is so packed with anecdotes and mind blowing ideas and descriptions of people, groups, ideologies and places, but does little to bring the reader to the emotions of the writer. It is too intellectual, trying so hard to be accurate and objective as to make the reader numb. Everything else, though, is top notch.

I don't think I would do the book service to summarize it in this review, but it goes so many different and interesting places: hippie communes, motorcycle gangs, famous artists, drugs, politics, road trips, changing the world, personal stories, psychology, acting, music, environment, native American culture, Wall Street, Easy Rider and so on. I do feel that the man who wrote this book is a great human being, but I have the nagging feeling that he misrepresents some of what he describes. Perhaps it is the somewhat neutral tone, the elevated language to render heart wrenching moments or just the fact that I find it so hard to believe a man could go through all that in just under two decades. I don't want to read Emmett Grogan's book Ringolevio on the same period, but you might want to, in order to cross reference and get a more accurate picture.

I recommend this book to just about everyone. It is one of those things that open your eyes a little to what was lost and what could be different and what you never thought about.

As additional resources, you might want to look at The Digger Archives online, where the site is terribly out of date, but the information there is (as is the Digger way) free. Frankly, I am disappointed to see that neither Sleeping Where I Fall or Ringolevio are offered free on that site.