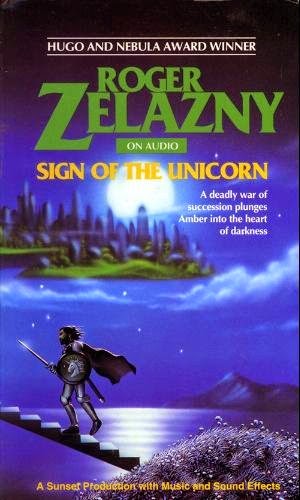 Sign of the Unicorn continues where the second book ended and ends with another cliffhanger reveal that more or less has little to do with the content of the book! While I admit this book is slightly more interesting than the first two, the way the characters act and particularly the way Roger Zelazny completely ignores some of the main points in those books is becoming increasingly annoying. And just like the guns in The Guns of Avalon were a mere detail in an otherwise completely unrelated story, the Unicorn is something that just appears twice in the same book!

OK, enough ranting. This particular volume of the story (because it would be quite impossible to read the book without the first two, so in essence it is still the same book) is hinting about the origin of the strange forces attacking the realm, as well as explaining some more what had happened to Corwin and the court intrigues that led to it all. More of the siblings make their appearance, but their characters are reduced to conversation pieces in feudal Poirot-like instances, when they just come when bidden or do something that is instrumental to the plot going... in the same direction it was going. Instead of walking around with two Ingrams on his belt, Corwin continues to depend on his sword and reflexes, while sleeping underneath the same roof as his murderous and treacherous relatives. Instead of getting the man who sprung him from jail and using his unparalleled gift, Corwin seems to have forgotten about him completely. When he misses an important piece of jewelry that actually saves his life, he just abandons it and goes to do his usual business. And what about Bleys? After finding a solution for enhancing the power of the tarot cards, he just decides to use it once, on a single person. What about Oberon, man?! He's your dad!

Apparently, it wasn't enough ranting. It is kind of difficult for me to accept the layout of the story. Like any young adult movie recently, the author takes your sight and nails it to his narrow perspective, his favourite character and the things he feels he needs to do. Same unsympathetic shallow characters, same disaffectionate way of describing events, same predictable deus-ex-machina devices to promote the plot. Thank God these books are short!