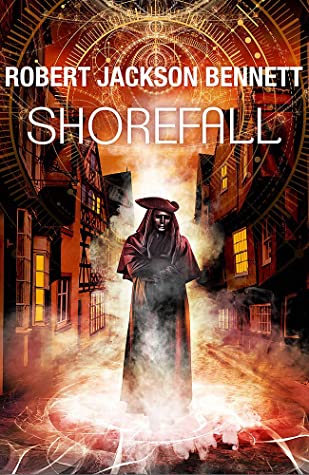 Shorefall continues the story of Foundryside, but the careful plans of the characters are completely upended by the arrival of a terrible villain. And when I say upended, I mean almost nothing except the characters in the first book in the Founders trilogy remains relevant and by the end, which I don't want to spoil, even less is left. This is a cataclysmic book in regards to the story and therefore it feels like a rollercoaster ride. I just couldn't put the book down. It's fun and terrifying, it's smart and compelling.

I was complaining in my review of Foundryside that the story and characters have turned formulaic and that the information given to the reader was too revealing. I guess in Shorefall these concerns are no longer relevant, since the characters have been already defined and knowledge is no longer imparted to the reader except when it is about to be used. Which is worse! Time and again the story seems to judder and change direction because of something a character suddenly remembers or reveals or gets a glimpse of in a vision related to some magical scriving. Scrivings don't work like that, they are code, they are careful imprintings of arguments designed to do a very very specific thing. There is no reason for them to contain personal memories. This is the equivalent of hacker films where the protagonist is using a graphical interface to break into a computer system and then gets a self playing video from the administrator on the screen.

Bottom line: I liked the book, it entertained me tremendously and I will no doubt read the third book in the trilogy, probably due in 2022 if the same rate of writing is applied. However there is a vagueness in the scriving of the book that makes it vulnerable to argumentation. The next trilogy (one can only hope it would be a stand alone book) from Robert Jackson Bennett will probably prove what direction he is willing to take in his writing.