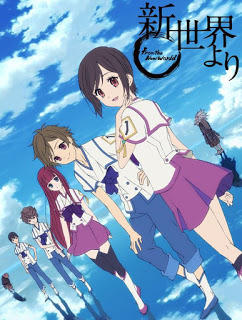 Shinsekai Yori, translated as From the New World in English, is the anime adaptation of the homonymous book from 2008, written by Yusuke Kishi. It shows, too, as the subjects touched are deep, the characters are complex and the story is wonderful. It is a true sci-fi, not only set into the far future, but also using serious concepts such as what it means to be human, what is the price of peace and questioning if we can ever change as a species and as a culture.

It is a complete plot told in 25 episodes, well animated, but I wouldn't call the animation special, yet the story is certainly worth it. If you want to compare it with something, try a combination between The Village and some fantasy kid school movie. While it begins like a post apocalyptic version of Harry Potter, it quickly turns into a discussion about the sacrifices required to preserve peace. It doesn't just stop at the young adult audience, but continues with new and new twists until it feels like you have a collection of stories that just happen to follow one another, yet they are very connected. The film is filled with Japanese ways of seeing the world, from the absolute obedience towards authority to the horror they instinctively feel when talking about mass destruction, but also random cruelty based on a class system, or that sense of duty that permeates everything everybody does, or girls always stumbling or being interrupted by men when they talk and told what to do. However, it doesn't stop there and it explains, in a way, why things are like that and what are their consequences.

In the end, you feel like humanity has been deconstructed and its ways of functioning laid bare and put to trial. I liked the characters and the emotional rollercoaster the anime has put me through. Really nice, Hollywood should take heed on how to do a good story and put it into motion. I highly recommend it.