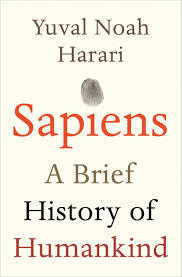 In 2014 Yuval Noah Harari became world wide famous for the English publication of his book Sapiens: A Brief History of Humankind. A lot of my friends recommended it, I couldn't turn around without hearing about it, but before I could read it, I watched some videos and TED talks from the guy so I was hearing the slightly whiny voice and I was imagining the face and mannerism of Harari while I was reading the book. And the truth is the book feels just like an extended version of one of his lectures. I found the book interesting, with some insights that were quite nice, but I think it started a lot better than it ended.

It goes through the history of our species, starting with the origins, going through the changes that shaped our society and identity. It goes on to explain, for example, how almost everything our society is based on is a myth that we collectively cling to and give power to. And he is not talking about religious myths only, but also notions like country, nation, race, money, law, human rights, justice, individuality, good, bad, etc. Like a house of cards, once we started to be able to think abstractly and communicate ideas, we've created a world that is based on assumptions on top of assumptions that we just choose to believe. I thought that was the most interesting point in the book and the one that made me think most. If our entire life as a species and as individuals is axiomatic, then how different could lives be if only based on other axioms?

Another great insight was that liberalism and individuality, coupled with the capitalist growth model that is based on a scientific and technological trust in a better future, are very recent inventions. Most of human history, even up to the nineteenth century, people were content with the status quo, were nostalgic about some bygone era that was "golden" and better than today, and people were stuck into their lives with no hope or even thought of changing them. The explosion of new discoveries and conquests comes from a new found hope in a better future, one based on technological progress and scientific discovery. Other ways of living weren't worse, they just were obliterated by people who chose to accept that they don't know everything and started looking for resources to plunder and answers to their questions. In contrast, whole societies and empires based on the holiness of stations manned by people who assumed knew everything stagnated for centuries.

Yet another point that I found interesting was about the state and commercial institutions eroding and replacing the traditional. Before the legal, moral, support, educational and emotional systems were part of the family or the extended community. Now they are outsourced to law, financial institutions, psychologists, schools, which thrive on the concept that we are individuals and need no one.

Harari makes the point that we are the product of evolution, not different from any other animal, but once we went over a threshold, we created new arenas in which to evolve. Something I didn't particularly agree with is his view that hunter gatherers were living a better, more content life, than farmers. Rather than working all day for a very limited diet, they were free to roam and enjoy the seasonal food that was literally hanging around. Further on we went through the Industrial Revolution and people were even more restricted by the rules of technology and industry. A big portion of the book is dedicated to this kind of thoughts about how our success bound us to a way of life we now cannot escape. The author even uses the word "trap".

In the end, Sapiens tries to analyse our state: is it better now than before? It goes through chapters that talk about happiness: what is it? do we have it? does it matter? Harari is probably agnostic, but he does favor Buddhist ideas of meditation and escaping misery by removing craving, and that is pretty obvious by the end of the book.The last chapter contains a short and kind of reused discussion about the future of us as gods that remake the very fabric of our bodies, minds and reality and, of course, the singularity. But while at the beginning each historical step of Homo Sapiens was analysed with scientific attention, with insights that were clearly coming from a lot of thought on the subject, by the end the rhetoric devolved into just expressing opinions.

So, I did like the book. It felt a bit too verbose, because Harari's style is to explain something, then give an example to make it clearer. If you understand what he explained, the example feels superfluous most of the time. I also didn't like that the book started great, with careful analysis and beautiful insights, and ended with obvious personal opinions superficially backed by facts. I could have accepted either one, but having both just highlights the contrast between them.

As a final thought, Harari mentioned Jared Diamond's Guns, Germs, and Steel (1997) as one of the greatest inspirations for the book by showing that it was possible to "ask very big questions and answer them scientifically". I tried reading that and it was way too thorough and heavy. So having something like Sapiens is like light reading for people who are interesting in science but not very bright :)