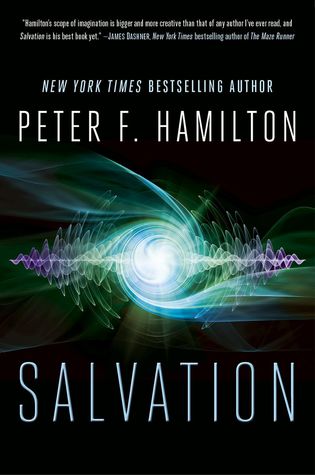 I consider Peter F. Hamilton to be one of the great science fiction writers. Yes, he has a formula, yes he messes up the endings, but the ideas and worlds that he puts on paper have rarely disappointed me. I can't say that of Salvation, either, but I didn't especially like it, as it gives away too much too soon, then proceeds on boring or enraging the reader with police procedural vignettes that we already know will have no impact on future events.

Hamilton has this method of combining at least two threads, usually one is hard science fiction and the other is fantasy or police procedural or something different, only to bind them together at some point in time. In this book, we see a group of people running away from an enemy species bent on exterminating humanity and also a peaceful future in which humanity has discovered how to create instantaneous transport portals to other places and was contacted by two different alien species. Somehow, how we get from one point to the other is the topic of the book, but the vast majority of it is about corporate security people that abuse their power to "get things done" or toxic cleanup people or other kinds of short stories that only bring some new information to light while eating up reading time. Then the book ends!

And it's a bit annoying that even the technical aspects don't add up, like how you can know how to make portals, but you still rely on nuclear weapons or rockets to do war, or that people fear sabotage and terrorism, but don't see the possible threat posed by personal portals to other worlds. Gravity alterations, atmosphere loss or pollution, a portal from a star to an inhabited area would have been much more dangerous. Also some of the ways characters act are completely unnatural and it feels jarring to see them do things in a sequence (heh!) only to further the story and not consistent to their character and expertise.

Anyway, I am reading Salvation Lost now, but in my view the first book in this series could have been a lot more, especially from a brilliant writer such as Hamilton.