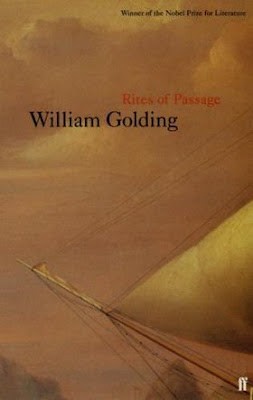 This is the second book by William Golding that I am reading. Unbeknownst to me, it is part of a trilogy! Even Nobel prize winners for Literature seem to can't help but write the damn things. How is one to finish reading all they want to read?! Anyway, the guy wrote Lord of the Flies, reason for the Nobel and a story I enjoyed both as book and movie. Rites of Passage has many similarities with that book. It happens at sea, on a ship, not on an island, but just as removed from the normal rules of civilised society. It reveals dark depths of human morality. It exposes hypocrisy and narrow mindedness. Golding also won an award for it, the Booker prize this time.

So, what is it about? There is this nobleman, godson of an unidentified but very important man, travelling on a ship from England to "the Antipodes" where he is to take an important state office. The guy is the highest socially elevated person on the ship, giving him some sort of equal footing with the captain himself, who is normally king and church on his ship. Now, the book appears as the journal of said guy, of the name of Talbot, written to his godfather, as a means to thank and humour the man, restricted in his own life by the gout disease. That is where the book is at its most difficult: the language is that of an Englishman noble from the 19th century, with antiquated words and funny ways of turning them into sentences. I pride myself on having understood and finished it, but now, that I know it is part of a trilogy, I am a bit disconcerted.

Anyway, the journal of Talbot presents us with the marvellous world of a ship at sea, forcing the reader to both empathise with the man, but also share some of his opinions of the lower castes and of the social system. We get to share his view of the current events as well. He thinks of himself as noble, intellectually and morally superior to other people on the ship, while exercising a benevolent and understanding indulgence at the actions of others. He truly seems to be the most intellectual person on board, as educated in comparison with others as a college graduate is to a four grade drop out. However, he is a bit of a dick, full of condescension and of the weaknesses of all men.

The main moral of the story is that his arrogant views on the world of the ship are reasonable, if taking as true the presuppositions he makes as member of his social class and having his position on the ship. However, they are completely wrong as related to what really happened. We understand this in the second half of the book, where he relates the contents of another man's journal, who's perspectives on the situations turn our perceptions on their head. Also, the finale is quite grotesque, revealing that his blindness to the world around him is, more or less, voluntary and part of the social system he represents.

This is a difficult book to read, but one that opens eyes, so to speak. Not only we get to see how English was meant to be used (bah, Americans! :) ) but also the author is taking us through the recesses of the human mind and society and the experience of the read is a visceral and personal one. If you can handle the language and the slow pace, I recommend reading this book.

There is also a quicker option for the ones who want to see what happens without having to read the books. The To the Ends of the Earth trilogy has been adapted to a miniseries, by the BBC, of course, starring Benedict Cumberbatch.