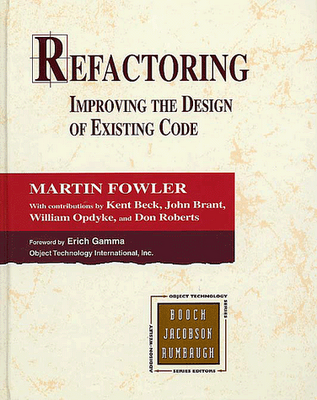 It was long overdue for me to read a technical book and I've decided to go for a classic from 1999 about refactoring, written by software development icons as Martin Fowler and Kent Beck. As such, it is not a surprise that Refactoring: Improving the Design of Existing Code feels a little dated. However, not as much as I had expected. You see, the book is trying to familiarize the user with the idea of refactoring, something programmers of these days don't need. In 1999, though, that was a breakthrough concept and it needed not only explained, but lobbied. At the same time, the issues they describe regarding the process of refactoring, starting from the mechanics to the obstacles, feel as recent as today. Who didn't try to convince their managers to allow them a bit of refactoring time in order to improve the quality and readability of code, only to be met with the always pleasant "And what improvement would the client see?" or "are there ANY risks involved?" ?

The refactoring book starts by explaining what refactoring means, from the noun, which means the individual move, like Extract Method, to the verb, which represents the process of improving the readability and quality of the code base without changing functionality. To the defense of the managerial point of view, somewhere at the end of the book, authors submit that big refactoring cycles are usually a recipe for disaster, instead preaching for small, testable refactorings on the areas you are working on: clean the code before you add functionality. Refactoring is also promoting software testing. One cannot be confident they did not introduce bugs when they refactor if the functionality is not covered by automated or at least manual tests. One of the most important tenets of the book is that you write code for other programmers (or for yourself), not for the computer. Development speed comes from quickly grasping the intention and implementation when reading, maintaining and changing a bit of code. Refactoring is the process that improves the readability of code. Machines go faster no matter how you write the code, as long as it works.

The book is first describing and advocating refactoring, then presenting the various refactoring moves, in a sort of structured way, akin to the software patterns that Martin Fowler also attempted to catalog, then having a few chapter written by the other authors, with their own view of things. It can be used as a reference, I guess, even if Fowler's site does a better job at that. Also, it is an interesting read, even if, overall, it felt to me like a rehearsal of my own ideas on the subject. Many of the refactorings in the catalog are now automated in IDEs, but the more complex ones have not only the mechanics explained, but the reasons for why they should be used and where. That structured way of describing them might feel like repeating the obvious, but I bet if asked you couldn't come up with a conscious description of the place a specific refactoring should be used. Also, while reading those specific bits, I kept fantasizing about an automated tool that could suggest refactorings, maybe using FxCop or something like that.

Things I've marked down from the book, in the order I wrote them down in:
That's about it. I have wet dreams of cleaning up the code base I am working on right now, maybe in a pair programming way (also a suggestion in the book and a situation when pair programming really seems a great opportunity), but I don't have the time. Maybe this summary of the book will inspire others who have it.

<p>Thank you, Andrei! The names of the refactorings are clearly not used out there. Even the simple automated ones that ReSharper does have different names in Fowler's book and site. That doesn't stop them from being instantly recognizable when explained.</p>