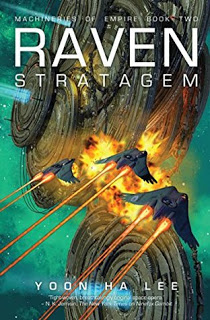 Almost a year ago I was reading Ninefox Gambit and loving every page of it. Raven Stratagem continues the story from where the first book in The Machineries of Empire series left off, but naturally the novelty wore off and I was left with just the story and the writing style... which are still great! Now I have to wait for Yoon Ha Lee to write the next book to see where the story takes me. One can still occupy oneself with the 5 short stories in the same universe until June this year, when it's supposed to be published.

One unfortunate effect of reading the book so long after the previous one was that I didn't exactly remember what had happened before. The book is still delightful anyway and can be considered as a standalone, with a little effort of imagination. I don't want to discuss the plot here, for fear of spoiling it, but let's say that while I enjoyed it and the characters, it all felt strangely aloof. Jedao's character is only described from the perspective of others, which makes it difficult to empathize with him. Even the ending feels a little bit rushed, with a grandiose effect, but little fuss over the implementation. One moment you are in a story, the next something happens that has little connection with anything else and then the book ends.

My conclusion is that either Yoon Ha Lee was unsure about the direction he was going to take the story, or he was very sure and the climax is to be had in the next book. In either case I recommend reading Raven Stratagem after Revenant Gun is published, to save you the frustration.