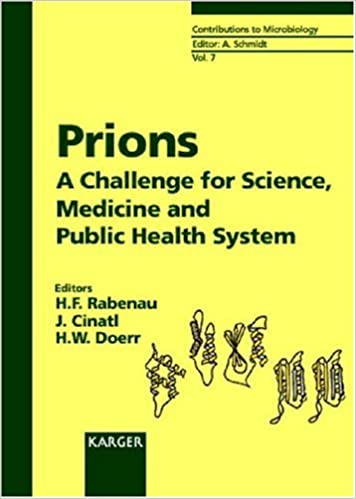 Prions are a fascinating subject that we know almost nothing about. They are misfolded proteins that somehow proliferate inside our bodies and kill us with 100% efficiency. The diseases produced by prions are the deadliest there are, yet we know little about how prions multiply and even how they manage to kill us.

Prions, a Challenge for Science, Medicine and Public Health System is a 2001 summary of works on prions. What does it say? That we don't know much. Then it gets terribly technical and, as I am not a biologist, I've decided to stop reading instead of pretending I understand anything. But I did scour the Internet for newer sources of knowledge and my finding is... that we still know shit about prions!

So, what does misfolding mean? Prions are proteins, long chain molecules that are at the border of chemistry and mechanics in such a way that the way these molecules come to rest (fold) determines both their chemical and mechanical properties. Somehow (and no one actually knows how) a protein that is manufactured by our bodies (and that we don't really know what does) gets folded in the wrong way, leading to behavior that is detrimental to the body (in ways we don't really know). There is also a mechanism that turns proper proteins to this toxic form, much like a zombie invasion at nanoscale. And we don't know how it works.

Why does it matter? Well, diseases such as scrapie in sheep, chronic wasting disease (CWD) in deer, bovine spongiform encephalopathy (BSE) in cattle (commonly known as "mad cow disease") and Creutzfeldt–Jakob disease (CJD), its variant (vCJD), Gerstmann–Sträussler–Scheinker syndrome (GSS), fatal familial insomnia (FFI), and kuru in humans are caused by prions. There is evidence that the same mechanism that destroys the nervous system in these diseases is also at fault with Alzheimer's. A biological weapon using prions, assuming it affects a large portion of a population, would kill 100% of the victims, decades after the weapon was used and without spreading the disease further.

And why are prions so deadly? Because the immune system doesn't react to them. They are not viruses, they don't have nucleic acids, they are really tiny proteins that slowly but surely spread throughout the body and and up killing the brain of the victim (not unlike zombies, hmm).

The leading expert in prions is Stanley B. Prusiner, the man who coined the term prion in 1982. The idea that a disease could be spread by just proteins was developed in the 1960 by people such as biophysicist John Stanley Griffith. Prusiner did a lot of work, but even so, there is little we understand about this, more than 70 years later.

Bottom line: prions are fascinating and show us how much more we have to learn about biochemistry and disease vectors. Even if we hypothesized their existence in the '60s, we still don't know much on how they work. I welcome more research on the subject, as diseases caused by prions, even if rare, are deadly without exception.