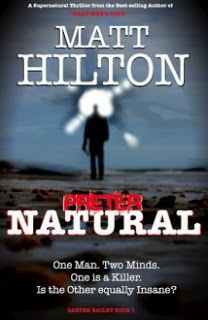 I really tried to read and enjoy this book, which is highly rated and reviewed, which makes me wonder whether there is something wrong with me. Whatever the reason, I couldn't even finish it. Everything in this book is grating my senses, from the writing style to the scenes details, from the editing to the basic story outline. If you've read Dexter (the book the TV show is based on, not the TV show itself) you will have found a similar plot, but as I thought that book was bad, this one felt worse. I can't imagine who in their right mind would give this a full rating.

I've found a blog post by the author, Matt Hilton, that describes the unfortunate period in which he wrote the book. His seventeen old daughter just died. Maybe that affected the writing style, maybe the fact that it was written in several versions that then were edited into this one. I don't know. He has my sympathy for his loss, but not for PreterNatural. In his situation I would have expected to at least get the grief part right. Instead the character lives with the mind of his family's murderer in his head and has humorous dialogues with it.

It's a bad book. I won't recommend it in any way. Considering this is the first and only book in the Carter Bailey series, I think even the author probably agrees with me.